Be it Bollywood or Hollywood there are beauties all around the world. But not everyone is perfect. While some flaunt their flaws with confidence others take the help of surgery to hide their flaws. For some it looks fabulous while for some it goes completely wrong. Here are the 17 people who underwent cosmetic surgery to hide their flaws or at least they tried to. Some came clean with their surgeries while some blatantly denied. 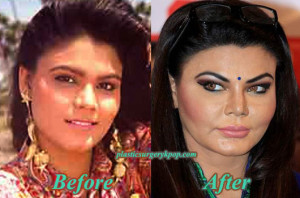 How can a list of cosmetic surgery start without the drama queen herself or should I say, plastic queen. She underwent nose job, lip enhancement, liposuction and breast implantation. Personally, I think she looked far better before the surgery, now she looks like a plastic doll and not even the good one. 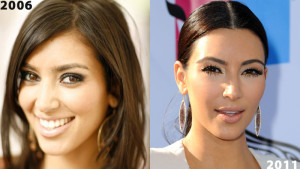 Fake nose, fake boob, fake hips you name it and you will find it on her. She has undergone so many surgeries that people lost count of it. Be it surgeries, chemical peels, Botox, she has done it all. I am sure her doctor might be the richest guy in the world just by performing surgery on her. 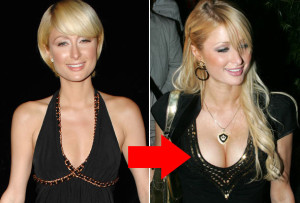 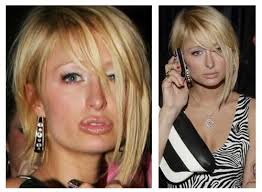 No matter how many times she denies it, it’s clear as crystal that she has underwent a cosmetic surgery, the proof is that nose job, boob job and your lip enhancement. Looks like your dermatologist said wrong about you being perfect. 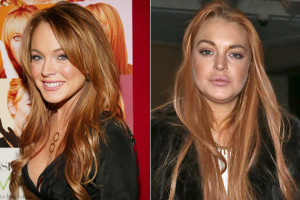 She was once a rising star and everyone’s sweetheart before cocaine and Botox hit her badly. A lip job, face lift and a breast implantation along with a hell lot of drugs totally ruined her face. Now she is an example for kids to never have a surgery or do drugs. 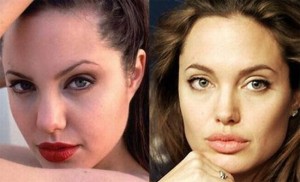 Everyone’s favourite and every girl’s idol Angelina Jolie too had gone a nose job to make it more narrow and sleek. She also has been rumoured to undergo a boob job, face lift and many injections too. Whatever it is she still looks pretty. 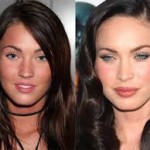 Possibly every guy’s dream girl Megan fox also underwent surgery. Sorry boys she wasn’t born that hot. she just looked like a normal girl with beautiful eyes before she spent $60,000 on her face. She underwent a nose job, a possible  breast implantation, a rhinoplasty and skin resurfacing. 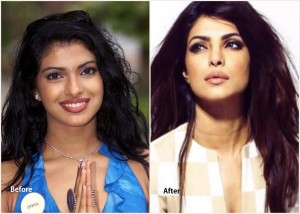 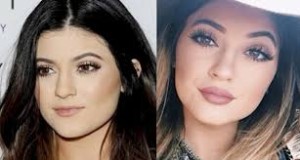 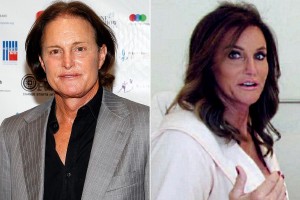 This is one hell of a family, no offense to the fans of the Kardashian/Jenner clan. Once a man called Bruce Jenner underwent many surgeries to now become a women called Caitlyn Jenner. Hats off to having guts and taking a bold step. Just the facial surgery costed her $70,000. More power to her! 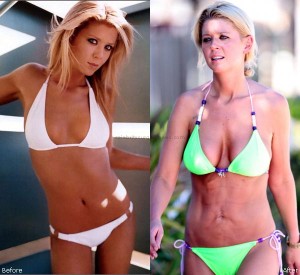 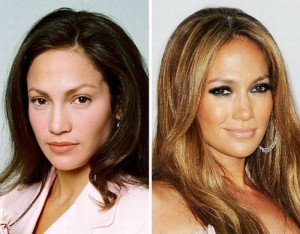 No matter how many times you deny it or publicly slam the people who talk about your surgeries, everyone can clearly see your nose and lip job JLO. We are not blind. 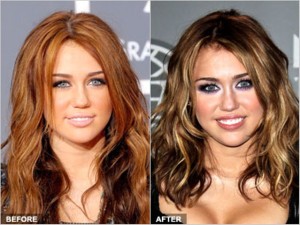 The once Disney star also had surgeries. Maybe it was the I am not Hannah Montana phase or something else. She had a boob job and rhinoplasty. 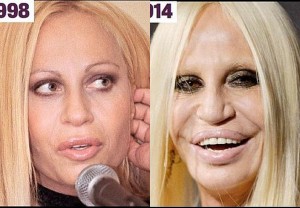 The face of Versace was once that of a stunning woman but after several dozens of surgeries and Botox , she is scary as hell. They say a picture is worth a thousand words well this picture proves the saying. No need to say what all she did to her face. 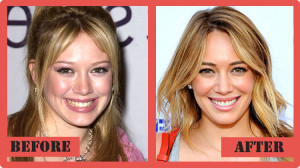 The Lizzie McGuire star Hilary duff is not different from others. She too has undergone a hell lot of surgeries like breast implants, nose job, lip injections and dental works. Lucky for her the surgeries went good. 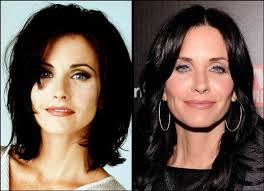 The famous series “Friends” starrer Courtney Cox too has been under the knife. While she did confess about her using Botox and cheek fillers, she blatantly denied having surgeries, but the picture says differently. 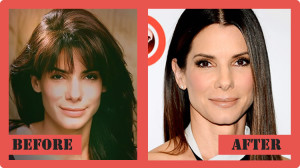 Everybody’s home girl and miss congeniality also has undergone surgeries. Though her marriage failure and bad movies reflect her choices, she knew how to pick a good surgery. 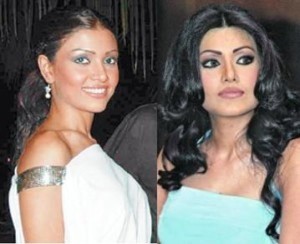