The stars aligned on the 73rd Annual Golden Globe Awards held in Beverly Hills, California on Sunday 10th January 2016. The red carpet shined with celebrities dressed in their best to attend the night fame, glamour, partying and celebration. The Award Show saw stars in a variety of fashion trends and we picked the best 8 out of the lot. 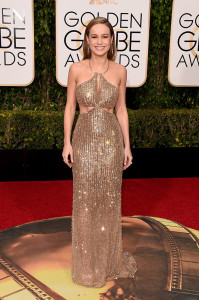 Brie added life to the red carpet with her long Calvin Klein sequin gown. It was body hugging and she carried it in the most glamorous way. The Room actress, who picked up the award for the Best Actress in a Drama kept the rest of her look simple and clean which is why she makes it to our list of best dressed stars at the event.

The Meadowland actress Olivia Wilde headed to the red carpet in a maroon body hugging, shimmering dress from the Michael Kors collection that fit her toned body very well; the Bulgari baubles completed her look. Everything else about her outfit from makeup to her hairdo remained minimal because of the shimmery yet elegant dress. 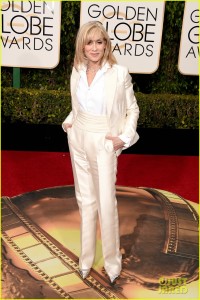 Judith became the game changer at the award night. She bedazzled us wearing an all-white pant suit with white stilettos. She was a best supporting actress nominee. She surely won the hearts of all fashion critics out there by successfully pulling off this classy look better than anyone her age could have. 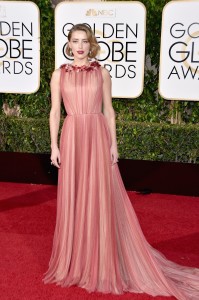 Amber Heard came solo to the award show as a presenter of an award and caught a lot of attention wearing the chiffon-tulle dress in a romantic shade of blush pink designed by Gucci. The floral neckline tripped us all into loving the way she looked. Her hair swept to one side, she managed to sweep us all off our feet. Her makeup and accessories were beautifully balanced, making her one of the best dressed stars of the night. 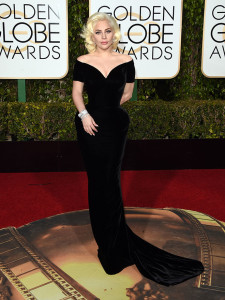 Lady Gaga was nominated for her role in American Horror Story- Hotel and she came to the red carpet looking nothing like we could’ve imagined. Her look was probably a tribute to the iconic Marilyn Monroe. It was a custom made Versace dress that she wore to the event and blessed the red carpet with her glorifying presence. She was definitely on ‘the edge of glory’. 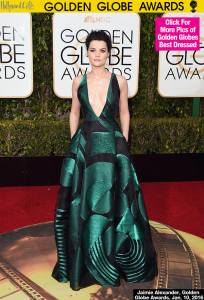 Jamie Alexander stepped foot on the carpet in an abstract print halter neck gown by Italian designer Genny. “The Blindspot” actress chose the perfect outfit that hugged her svelte figure in the right places and the very, very deep neck added exponentially to the sexiness quotient. 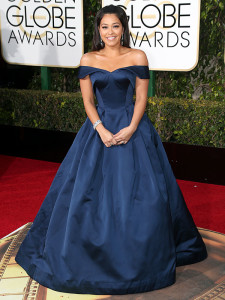 Gina had the whole Cinderella moment going on for her at the red carpet event. She had worn a Zac Poson gown paired with Neil Lane diamond jewellery. From the off shoulder to her hair tidily let down to her makeup, everything about her look was very simple and she looked both adoringly stunning and beautiful. 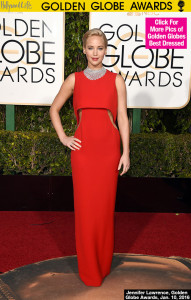 The first place goes to Jennifer Lawrence because she was, hands down,  the best dressed actress at the Golden Globe Awards, invalidating all arguments about her style. She turned up with a hot cherry red straight gown by Dior Haute Couture that had very sexy and elegant cuts in the midsection. She played the accessory game greatly by keeping everything minimal since all eyes rested on her 156 carat diamond necklace.

All of these stars are now on the list of people from whom we will be drawing our inspiration throughout the year in fashion!

Journalist with a craze for fashion brands, designer clothes, bags and, shoes.