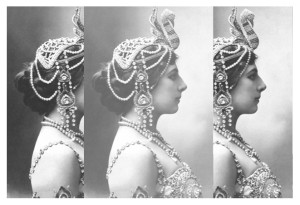 This is an especially interesting feature to write because we never quite give enough credit to the costume designers of a film. But a film can never be as impactful or deliver it’s real message without the proper attire to go with it. So they are not bluffing when they say that the clothes make the man. Each of these ladies are forever remembered for these iconic looks that could not have happened without the right Fashion backing it! So here you have the most iconic of Bollywood’s fashion statements through the ages:

Hunterwali Nadia emerged as feminist icon of Hindi cinema, who was portrayed as the one who would break the glass ceiling and overturn the patriarchal order.

Kapadia’s modern wardrobe and hairstyle in Bobby, consisting of knotted polka-dotted blouse and earphone hairstyle, made her a youth fashion icon of the times.

While Rekha was probably the first in ‘Silsila’ (1981), Sridevi rode her way to history with ‘Chandni’ (1989) donning what? Yes, the ever so sexy saree.
In early 1990s, Madhuri Dixit made hearts flutter with her purple saree and ‘designer’ blouse in ‘Hum Aapke Hai Kaun’ and this was only the beginning.

Who can forget this movie and it’s extravagant sets? And we sure can’t forget the beauty that were its costumes! The costumes were contributed by Maganlal Dresswala who portrayed the grandeur and vintage character of the movie.

Rekha forever remains memorable in this pearl-hued brocade dress. The munjhra look from Umrao Jaan has been replicated by several heroines since then and I’m sure the trend will continue forward.

Rani is shown with the veil lowered over her head and jewellery  that is the distinct style of Rajasthani women. Colours red and orange are prominent. This movie curated the traditional Marwari lady’s look very well and forms a reference point for anyone who wants to peep into the Rajasthani culture.

I could go on writing a whole article about the much talked about outfits in this film but we all heard the stories about it’s Lehengas that weighed several kilos and costed a fortune. Many new forms of saree drapes of length 8-9 meters were shown in rich vibrant Indian hues, and there were exquisite Benaresi sarees, brocades and silks.

When there is a film of this grand level, how can the fashion stray behind! We saw every Mughal thing that is royal and still cherished by those who can afford it be it elaborate embroidered fabrics to beadwork and mad jewellery.

Bringing back the 70s era to Indian cinema, Action Replay was surely not the best of movies in terms of its content. but its over the top swinging 70s outfits were absolutely on point. Total fashion nostalgia happening here thanks to the floral prints, polkas, bright colored bell bottoms, short tight shirts, knotted blouses and what not.

Fashion that was is fashion that will always be! The requirement of a film dictates the period, character, setting and the costumes help in depicting the director’s vision thoroughly. This is how a look becomes iconic and forever remember because it was so grand and so realistic and that is exactly what all the above looks were, and this is how fashion statements are made!

One thought on “Fashion That Was: Bollywood’s Age Old Style Statements”