Many of you might have read and heard about Kendall Jenner’s recent skirt-pants hybrid outfit in New York prior to the closing of Chanel Paris-Salzburg show. For those of you who haven’t, let me enlighten you with this piece of information that had the paparazzi in total awe of this Jenner girl. 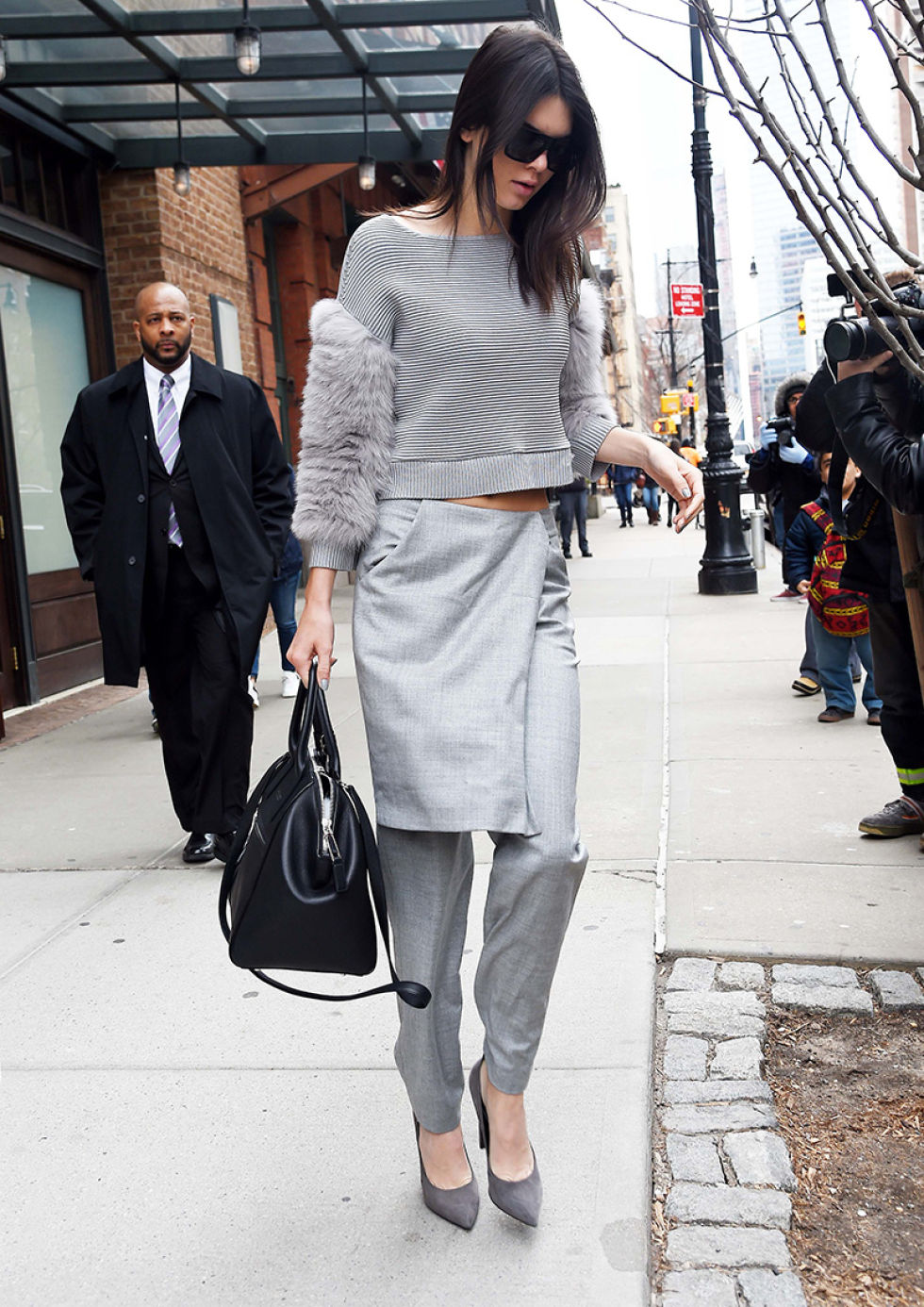 Recently, Kendall Jenner was snapped dressed in a monochrome outfit consisting of a furry-sleeved textured pullover paired with a similar grey-shaded pair of skirt-pants hybrid in broad daylight in New York. To complete the look she chose a pair of sleek grey pumps.  The whole ensemble looked so chic that I was in unexplainable appreciation for this model who is known for her bold choices when it comes to clothes. 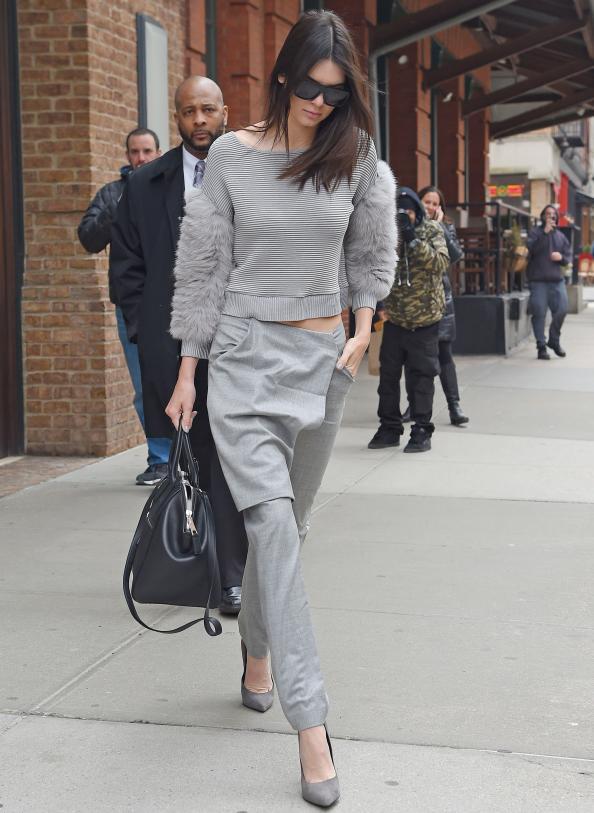 The skirt-pants hybrid was immediately given the name of ‘SKANTS’ and many are wondering if the trend will catch up because not all can carry of such a perky combination with sheer elegance and an attitude so daring. This move surely calls for an applause!

The skirt layered over the pants begins from the front part of the left leg across the right leg like a normal basic skirt and ends at the right side seam. So it doesn’t wrap around her waist like an entire skirt, but more like a half skirt, thus, giving the outfit the look of a pair of normal trousers from behind. 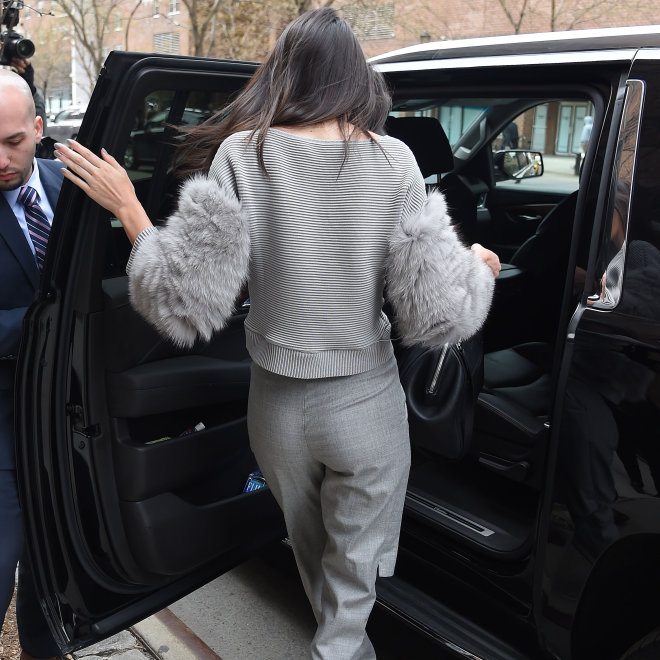 Call it magic or call it style this lady sure knows how to spark off a trend!

If you thought that Kendall Jenner is the only one who could be capable of donning the ‘Skant’ look, see who’s giving her a competition. 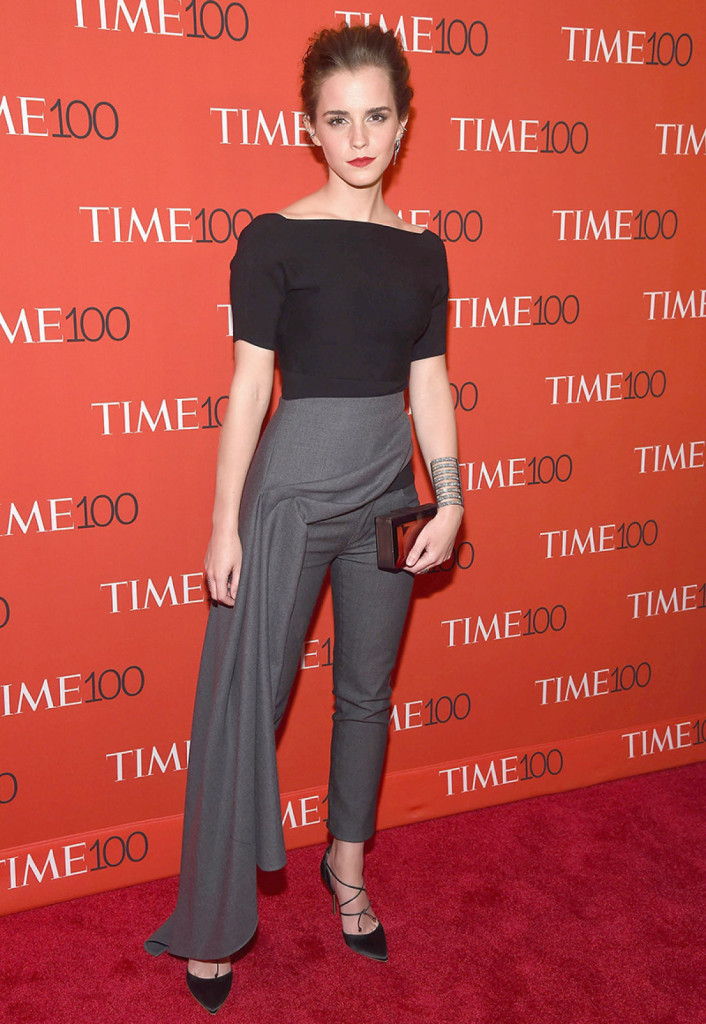 Yes, the ever elegant and dazzling beauty, our lovely Hermoine- Emma Watson. The Harry Potter star sure knows how to startle everyone with her magic even on the red carpet. A few weeks after the Jenner girl was seen dressed in a pair of ‘skants’, Miss Watson was clicked at the Time 100 Gala wearing a dark grey skirt-pants hybrid combination too! So, if you’ve been wondering if this hybrid look can become a thing, I think Emma’s answered the question with a big loud YES! 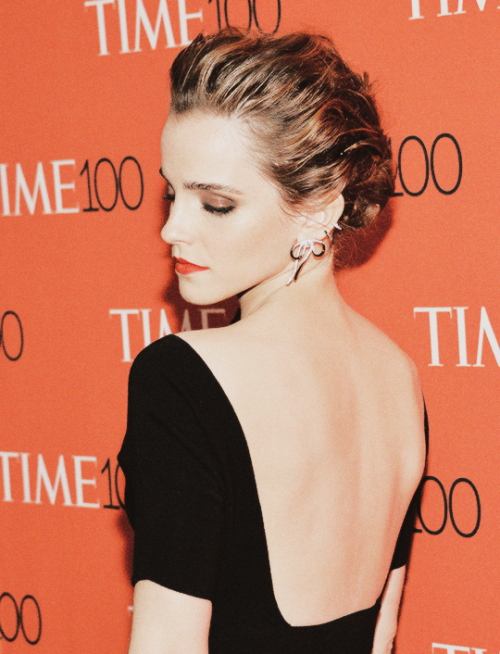 She chose to wear a black boat-neck top with a low back tucked inside the grey skirt. The skirt, like the one wore by Kendall Jennar ends at the side seam, thus, giving a similar pant-like look from behind except that unlike the ‘skants’ worn by Jenner, Emma’s skirt is floor length and looks like its a different piece and is detached from the pants when seen from left side but from the right side it looks like its stitched along with the pants (see below). 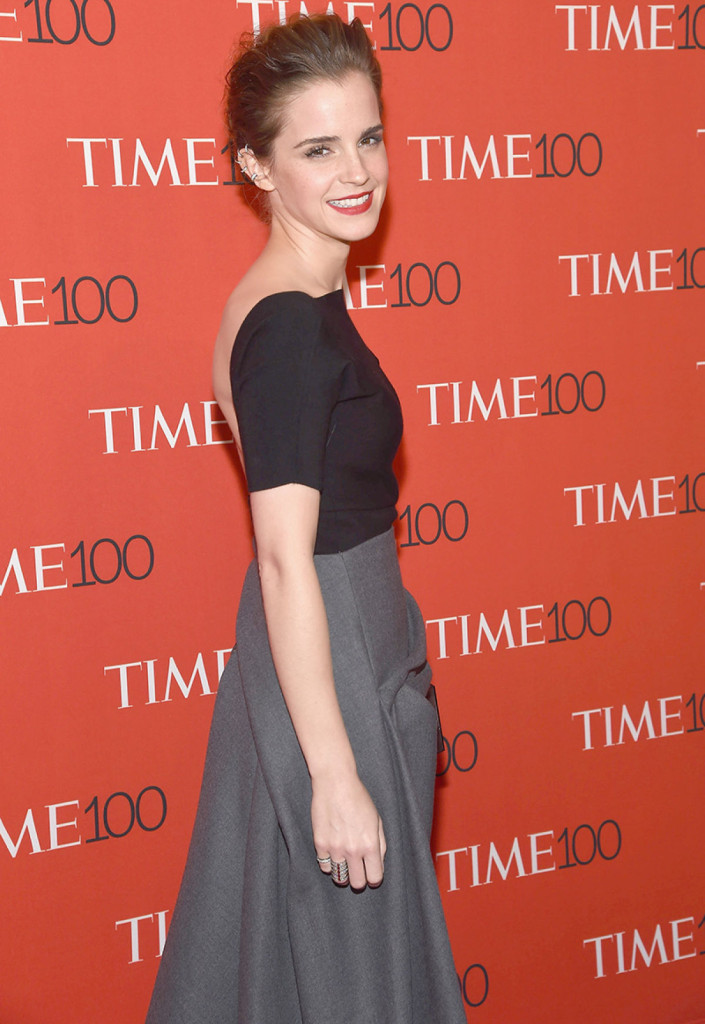 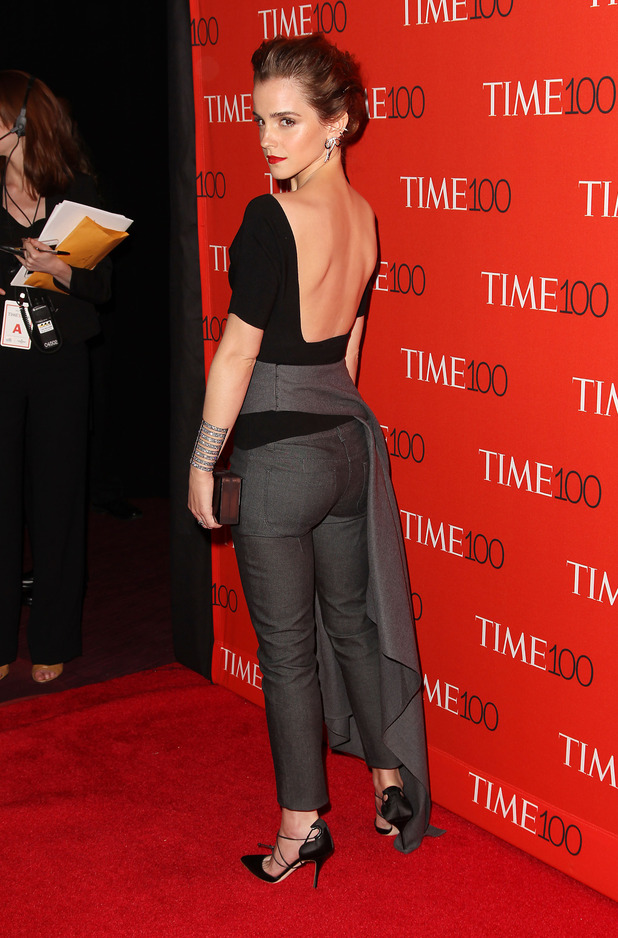 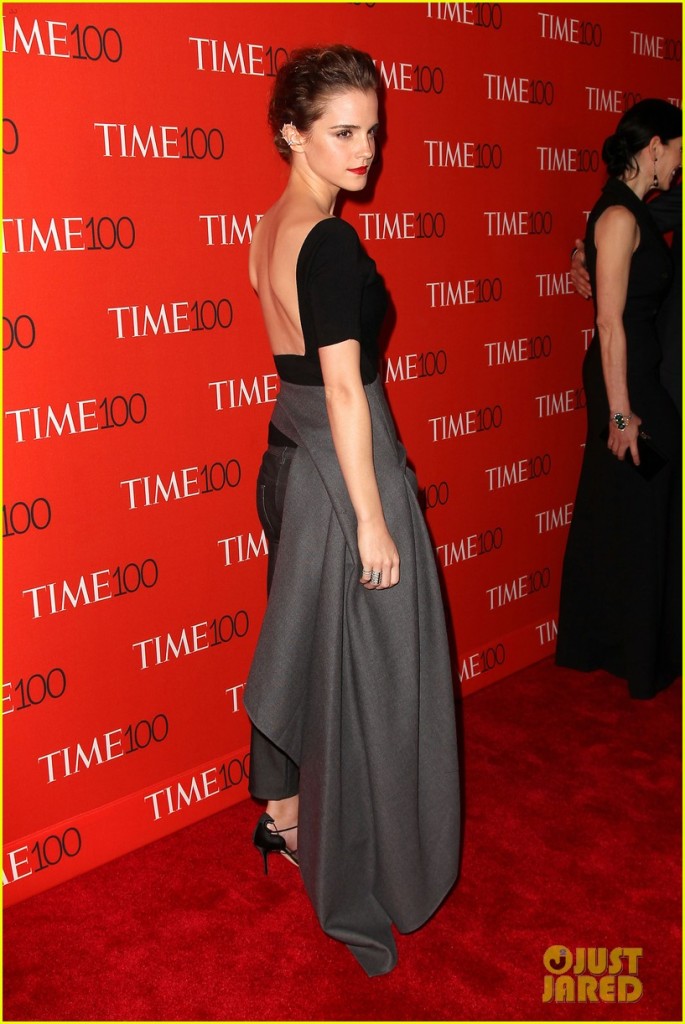 From the front the outfit looks like something, from the sides, something else and from the back something totally different. Three different looks in a single combination! Atta girl!

Giving these ladies some company in hybrid pants is Jennifer Lawrence who attended the Dior Cputure Show in Paris wearing a pair of skirt-pants combination designed by the one and only Dior himself. The gatherings at the waist of the skirt impart a flair look. J-Law chose to pair the ‘skants’ with a pale pink highly cropped top. 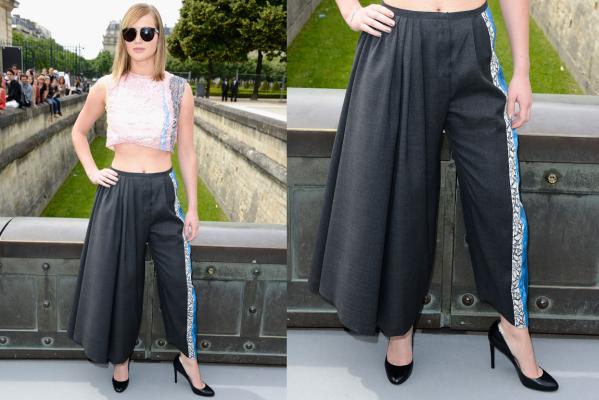 Well, to add to the list of people going all fashionable with the hybrid culture there’s the KING of fashion- Georgio Armani! With his Autumn-Winter 2015 collection Armani showcased skirt-pants combinations in marine blues, greens and soft greys. While at the front the skirt and pants looked like separate items of the same shade, from the back they looke like low-slung pant seats, something only a few people can carry off well. 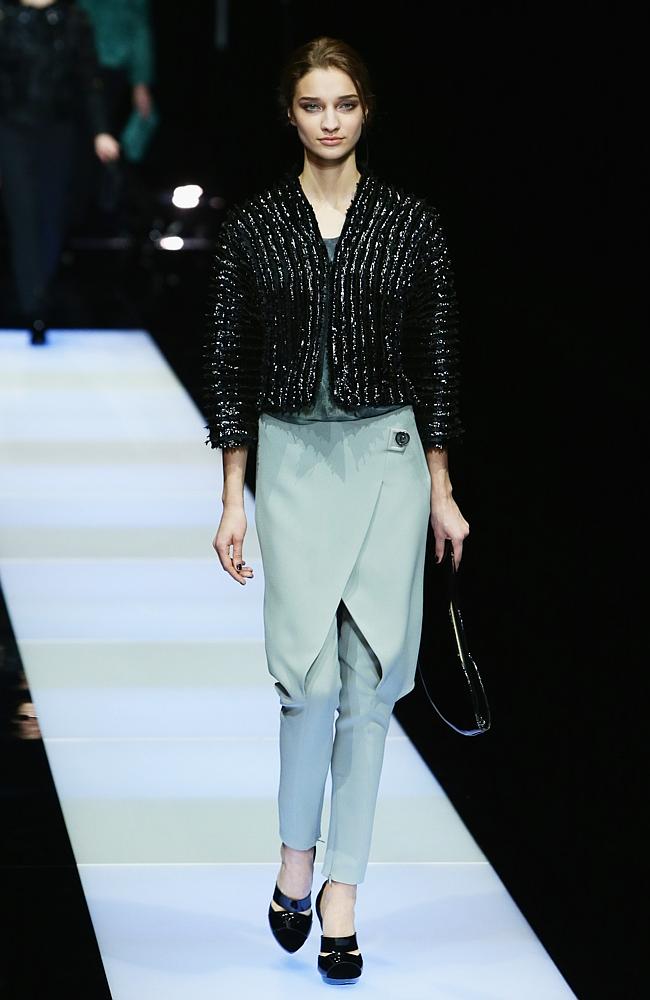 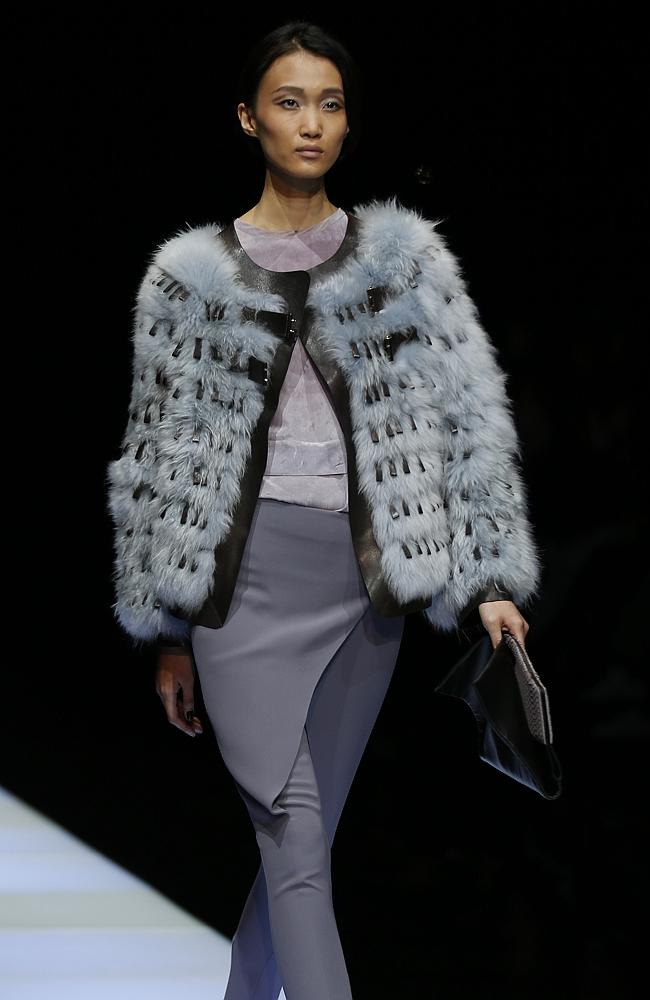 These were given the name ‘skeggings’ because the pants were more of jeggings and less of trousers. The models combined the hybrid look with a waist or hip-length jacket of similar tins and shades made of fur and leather with some covered in sparkling embellishments. 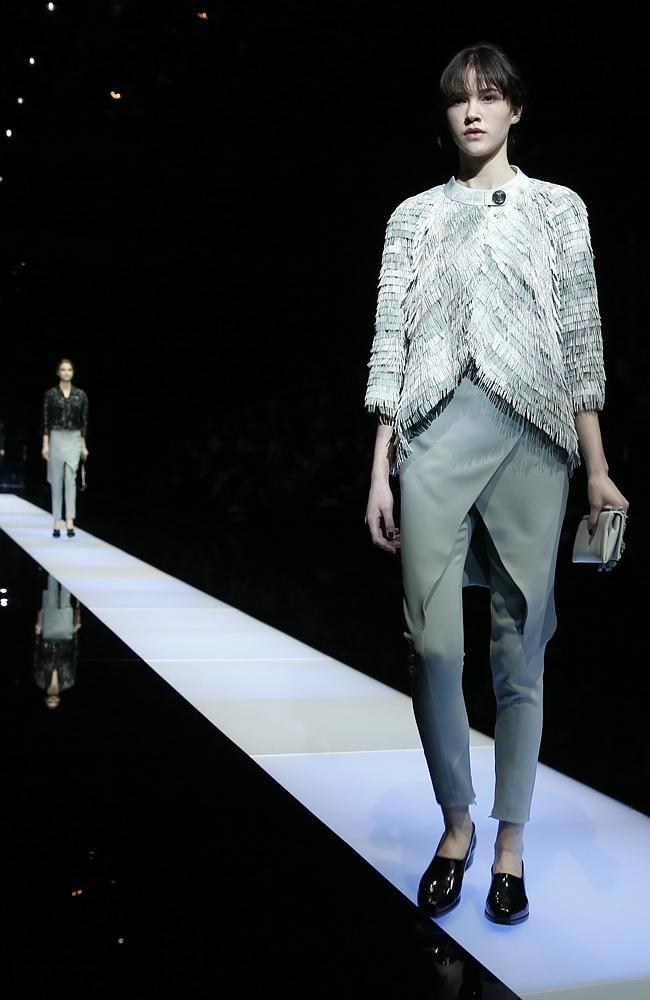 Now that you’ve seen quite a handful of the skirt-pants and skirt-jeggings hybrid trend many of you might be wondering if the trend is soon to catch up or not. It may or it may not. While some might find this new experiment quite bold and chic others may not be quite satisfied or impressed. But that’s okay as we all have our own sense of style and fashion and its not necessary that what these celebrities and designers are coming out with has to appease everyone’s eyes. Like they say, “To each his own”.