Sci-fi fashion , something which is not well touched in India , but isn’t it mesmerising to be the show stopper? Not to wear these garments , but yes to take the concepts like 3D printing, use of metal, lurex !! So, lets have a look on the London’s sci-fi film festival!!

Given fashion’s forward-looking nature, it’s unsurprising that designers have often turned to science fiction and its associated futurism for inspiration. To mark the start of London’s sci-fi film festival, which kicked off on 29th May and ended on 7th June.

Paco Rabanne was at the helm of the 60s Space Age fashion movement and his use of unconventional materials, making clothes from plastics and metals. Indeed, his inaugural 1966 collection was titled ‘12 Unwearable Dresses in Contemporary Materials’.

Hussein Chalayan is the master of metamorphosis. The designer views technology as “a way of pushing the boundaries of what’s possible,” and his dedication to tech-savvy sartorialism was particularly evident in his SS07 show: ‘transformer dresses’ changed shape as models stood on the runway, the micro-motor-powered garments creeping across their wearers’ bodies as sleeves shortened and hems lifted.

Alexander McQueen has caused a stir when reflecting on and when prophesying about the future. Some of his standout moments in the latter category came in the AW99 season. Held on the brink of the millennium, his show saw models channel robots, their bodysuits covered in neat configurations of LED lights which conjured visions of a human circuit board. 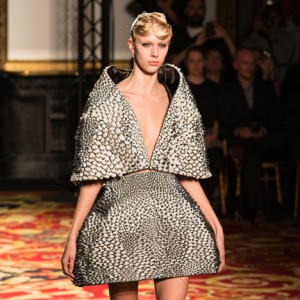 Iris Van Herpen, the celebrated ‘fashion alchemist’ who was the first designer to create a 3D printed dress, has long explored our dynamic relationship with science and the digital world. Her visionary brand of sartorialism reached a climax with her human installation for AW14, titled ‘Biopiracy.’

So ,these garments are tough to imagine. Right? But what if Deepika Padukone wears the 3D printed dress ? Or what if the next alien film have the light dress on? Bollywood can be conceptional. A beginning! Taking thinking to next level: Avant garde coutures – The technology!!

I am a fashion designing student . I have a flair for writing as well as I like to design combining extreme things mostly nature and technology . !