Ever felt that moment when all the ruckus and tension of your wedding is over and all you want to do is escape into a magical dream with your new man? Yes, we’ve all wanted that serenity, that’s exactly why honeymoon destinations were created. Everyone has those pre-planned places like Paris, London and Italy, but have you ever taken a look into what the unsung places have to offer? So here are the Top 10 honeymoon destinations of Europe that you need to head to with your man! Pack up your bags and grab your sunglasses and sunscreen because it is time for an adventure! After all the HONEYmoon is meant to be SWEET 😉 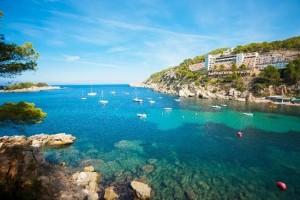 The ultimate summer destination with the wildest nightlife, Ibiza is a party!  Indulge in groovy music and watch the sun go down on the horizon with your loved one.

When to go: Summer (June, July or August)

The two largest towns in Ibiza are Ibiza Town and San Antoni which are situated near the airport. So they would be a great place to look for a hotel. 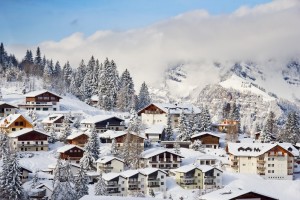 Melt the heat away as you enjoy the winter wonderland, that is, the Alpine region of Switzerland, conventionally referred to as the Swiss Alps which represents a major natural feature of the country.

When to go: November or December

The Swiss Alps is a great region to take a break at and be a part of the best Ski experience, with a large number of Ski Resorts, Mt. Titlis being my recommendation.

The Greek island, often the underdog, due the popularity of its counterpart Santorini. But Mykonos has its own charm to offer with palatial houses, turquoise waters and mouth-watering cuisine.

When to go: July or August

Beachy sunsets, wartime artefacts and eye catching houses will leave you wanting more of the sun, sand and sea. 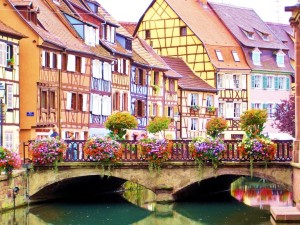 The tiny town of Colmar lies in the North-Eastern region of France in Alsace.  Home to “Little Venice”, this German-French hybrid town is known for its wine and timeworn architectural landmarks.

When to go: April or May

Get a whiff of classy wine and find yourself living with the reminiscence of the French Revolution as you enjoy beauty and tranquility of the ‘Capital of Alsatian Wine’. 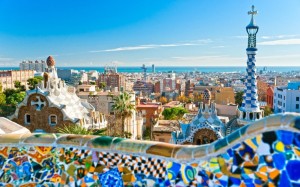 The second most populated country in Spain, Barcelona is a melange of Catalonian and Spanish culture with food, architecture, beaches and football.

When to go: June, July or August

Home to the architectural genius Gaudi, Barcelona takes you through his masterpieces along with Picasso. At the same time, take a dip in the cool beaches and shop till you drop at large markets. Barcelona offers an overall experience of perfect tourism.

Nothing says Barcelona like the masterpiecesof Antoni Gaudí which reflect Catalan modernism. The Park Güell is the modernist park, the crown of the city. Other sites include Casa Batlló and La Pedrera. Another eye-catching piece is La Sagrada Familia, Gaudi’s unfinished church, which is the most visited tourist attraction.

Also check out the Picasso Museum which holds his early works, which will thoroughly interest art lovers

Want to take a quick food break? La Boqueria is Europe’s largest food market, situated in La Rambla. With not only amazing Spanish food, it also has magnificent architecture to make the eating experience even better.

If you want to take a break from all the sightseeing, it’s always a good idea to head to the relaxing beaches. Barceloneta and Sant Sebastià are two popular beaches known for cafes, bars and bistros. Or go for the Font Mágica Fountain, or a magical light, water and music show

The best way to end your day is to head to the Camp Nou Stadium, home to the pride of Catalan football giants, FC Barcelona and football legend Lionel Messi. Watch them play a home game and you will not be disappointed! Treat your husband to a little sports dosage an after the game, visit the FCB Museum for an insight to the silverware, trophies and Barcelona legends 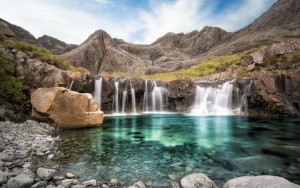 The Inner Hebrides is an archipelago off the west coast of mainland Scotland, to the south east of the Outer Hebrides. Together these two island chains form the Hebrides and they let you explore the unseen treasures of Scotland.

When to go: July or August

The Inner Hebrides includes islands such as Skye, Mull, Staffa etc. Each island has its own highlight when it comes to nature, wildlife and castles.

The Isle of Skye is filled with wildlife with the likes seeing the White Tailed Sea Eagle, otters, seals, whales, dolphins and red deer which are seen around the island.Near Glenbrittle are the Fairy Pools with turquoise water, greenery and grey rocks. Take a dip in the magic of the Fairy Pools or enjoy the scenic beauty

Another vision of Scotland is Fingal’s Cave in Staffa Island. The cave has columns of rocks and blue water runs through the middle .It is possible to explore the cave on foot.

A number of castles are found on the islands depicting the imperial abodes of ancient Scottish clans. On the Isle of Mull are the Duart, Moy and Torosay Castles. Other than wildlife, Isle of Skye also has castles like the Dunvegan Castle, Armadale Castle, Caisteal Maol, Duntulm Castle and Knock Castle

And at last is a unique, adventure experience which involves a boat ride around the third largest whirlpool in the world, Corryvrecken whirlpool in the Gulf of Corryvrecken. The Gulf also has sea whales, porpoise, dolphins, basking sharks, otters, golden and white tailed sea eagles. Situated between two islands, it is possible to either experience the whirlpools from a close-range by boat or you can fly over it. 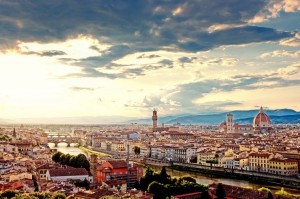 Tuscany is in central Italy and is known for landscapes, traditions, history, artistic legacy and its influence on high culture

When to go: Anytime

Italy is definitely the most romantic place to be and Tuscany brings out love with vineyards, romantic walks and mouth melting gelato.

The capital, Florence is the proud host of The Leaning Tower of Pisa, a historical magnum opus which should not be missed

The capital, Florence has loads to offer. One such place is the Ponte Vecchio Bridge, with an amazing view, built during the 14th Head to Vivoli for some exquisite, classic Italian gelato to beat the heat

Finally shop till you drop and take back a few Italian memoirs from the Colle di Val d’Elsa. Which is a tiny village with a medieval centre

Hallstatt is a small lake town in Austria. It is located near the Hallstätter lake. It has a small Alpine setting with terraced homes along with laid back, friendly locals. Aside from strolling the quaint streets, our favourite activities in Hallstatt include visits to the local salt mine, the Bone Chapel, through giant Ice Caves, and boat trips onto the imposing lake.

When to go: May, April or June

This small town has numerous things to show including huge salt mines that highlight the town. Apart from that stroll down the quaint streets and relax on a boat trip on the lake.

Be the captain if your own boat and enjoy the peace as you float on the lakes Gosau and Obertraun. You can choose from a range of boats such as rowing boat, sleek electric boat with a sun roof or a Swan pedal boat

Then enjoy a ghostly yet unique experience by visiting the ‘Beinhaus’ also known as Bone House, which holds over 1200 human skulls where 610 of them are painted and arranged with family groups.

And then head down to the subterranean salt mines, either down a 64 m slide or take the stairs. The brine channels take you back about 7000 years. And at the bottom there’s even a salt lake. This shows you why Halstatt is called ‘Salzwelten’ or Salt World

For a great panoramic view, go to The 5 Finger’s viewing platform for an incredible adrenaline rush from above 1300 feet. 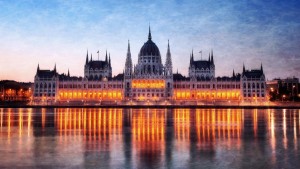 Budapest is the capital and the largest city of Hungary, and one of the largest cities in the European Union. It is the country’s principal political, cultural, commercial, industrial, and transportation centre.

When to go: Late March or April

Visit the city skyline’s distinct features- The Royal Palace and Castle Hill. This building has the Hungarian National Galleryand the Budapest History Museum .Explore the Castle District: check out the view from the famous Fishermen’s Bastion, admire the tiled roof of the Matthias Church or try  some delicious cake at the Ruszwurm café

Budapest has underground thermal water systems and hence do not skip relaxing in the Széchenyi Bath. Along with a completely serene atmosphere, take in the stunning architecture surrounding you

Apart from walking along the banks of the Danube, you can also enjoy a boat ride to envision the night lights of Budapest. Or take romantic strolls down the Margaret Bridge, the Chain Bridge, Elizabeth Bridge, and Liberty Bridgeto enjoy the breath-taking views.

Lofoten is an archipelago and a traditional district in Norway. Lofoten is known for a distinctive scenery with dramatic mountains and peaks, open sea and sheltered bays, beaches and untouched lands. Though lying within the Arctic Circle, the archipelago experiences one of the world’s largest elevated temperature anomalies relative to its high latitude.

When to go: September, October

The icy island is absolutely scenic and thriving with activities. Most of them give you a spectacular view of the small island but at the same time makes it a memorable experience.

Scuba diving within the Arctic Circle will definitely take your breath away while you are submerged in the pristine water with arctic flora and fauna.

One thing that cannot be missed while in Lofoten is watching the Northern lights as they paint the night sky with splatters of colour. The best place for such a view is Tromsø

While in Norway, it is a good idea to visit the blue Ice caves in Luster to be a part of a magical, ice kingdom. The beauty of this makes it an overall romantic experience

Experience the Viking Age at Borg where there is a Viking longhouse. The building is 83 metres long and has been reconstructed asa living museum with finds, reconstructions, exhibitions and domestic animals

These places may be different when compared to the clichéd ideas usually thought of when one says “honeymoon destinations”. But with many hidden secrets and treasures, these places have so much more to offer, to make your honeymoon experience the most passionate and unforgettable one.