Growing up in the 90’s and 2000’s most of my film viewing experiences has memories of Aishwarya Rai. There was a time when the name Aishwarya Rai was synonymous with beauty, with her cat eyes and electric smile; maybe it’s true even now. She has always had this amazing fashion sense and has never really made mistakes with hair colour or style. And she could pull of any look with grandeur. In her movies she has played a princess, a student, a house wife, a policeman’s wife, a detective, a big shot burglar, and so on and so forth. It has always made me think that even though none of us can look like her, we can pull off different looks too! Here are some of her many different avatars (in movies and otherwise):

Perhaps one of the most memorable films of her’s where we will never forget for her costumes is Jodhaa Akbar. But she has sported the ghagra choli and sharara look in many films and as a show stopper.

To the untrained eye, she may just be wearing a skirt and top kind of thing in every picture (but you know she is actually wearing different kinds of skirts), but she looks completely different in all pictures. This is because of the different type of makeup and hairdo in each style.

When it comes to wearing evening gowns, it is either a make or break event. But not her.

Be it a simple black and white body-hugging gown with hair pulled up, or a gold number with her hair down, or a bold teal she completely ROCKED the outfits.

Coming to the saree, the proud treasure of India. We all know that there are now a head-spinningly large number of types of sarees- silk( even in silk there is Banaras, Kanchipuram,Muga,Tassar,Arani,Paithani,Dharmavarm to name a few),georgette,chiffon,crepe,designer,cotton( Bengal,Chanderi,Coimbatore,Madurai Chungudi),etc…. In earlier times, the region where we come from was shown in the type of saree we wore and how we wore it. But now due to globalization and all that, we all want to wear dresses that come from other parts different from our own.

So here are four completely different sarees worn by Aishwarya Rai from different parts of the country.

With all the Mock United Nations starting right from school and the big corporate meetings later on, most of us have worn formals at least once in our lives.

Aishwarya has pulled off the Barney Stinson look in many a times.

This is the one picture for which she has probably receives the maximum number of criticisms, but I think that looking like a goddess after having a baby and at around 80 kgs, is an astounding feat, for which she should be appreciated ,not depreciated. 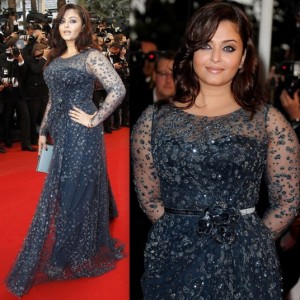 And she can look like mortals once in a while too! 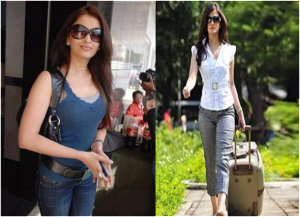 Last but not the least comes the bridal look. Now, we all have seen her face don the advertisements of jewellery and sarees, often in the bridal attire. Even today, a lot of us can only hope to be as beautiful as her on her real and reel weddings.