Every teenager goes through this phase where she wants a tattoo of her favorite quote – this is usually from a song, a tumblr quote or something after a bad breakup! Then we have the free spirits who want wings and birds flying to embrace their sense of freedom and individuality.  Some chose a simpler tattoo like an infinity circle or an anchor. Evidently finalizing a tattoo is a really tricky task. It’s something you’re going to have for the rest of your life – unless you go through the more painful task of getting it removed. You need to choose a tattoo that you won’t get sick of seeing every day, one that you won’t look back at as a mistake and most importantly a tattoo that won’t look weird when you’re a grand mom with saggy skin! Any girl who’s even the slightest bit confused about what she should get inked on her body can have a look at these top 5 tattoos (my personal favorites) to get some inspiration. 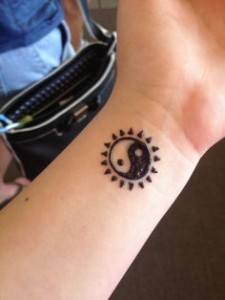 The Yin Yang, which dates back from ancient China, is based on the belief that the universe consists of two opposing forces which are complementary. The outer circle represents everything in the universe and the universe itself. The white part inside represents the good, while the black part represents the bad in the universe. The dots inside each region represent that nothing is absolute, meaning that good contains some evil and vica versa. It emphasizes that nothing in this world is black and white; each exists in the other as well as need the other to exist. This tattoo is apt for those who believe that life can be divided into shades of grey. It could act as a symbol of strength for those going through hardships and a constant reminder that life isn’t always going to be easy.

FAMILY AND LOVED ONES 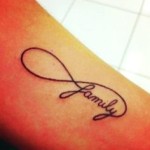 When I say loved ones, I don’t mean get a tattoo of the boy you’ve been seeing for a month! Get your mom or dad’s name tattooed, or even better get both! Something like this infinity with the word family written in-between, or a similar thing with ‘mom’ and ‘dad’ would really make your parents happy. Since they’re the ones who have always been with you through thick and thin, I think they’re the ones who deserve to be a permanent part of you. You needn’t restrict this to parents; you could get your grandparents name or even your siblings name inked. Even initials are good enough, if you don’t want something too big. After all, it’s the thought that counts! As Wiz Khalifa said, how can we not talk about family when family’s all that we got? 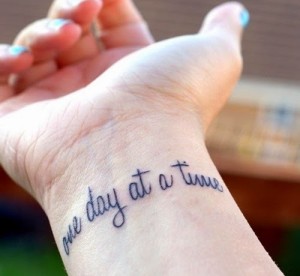 You know those quotes you see on tumblr which just leave an impression? It could be a whole paragraph of inspiring words or just something as small as “believe” or “faith” which always helps you get through a bad day. It is stuff that keeps you going and constantly reminds you of the road ahead. But think well before you get something of this sort inked, you need to live with this forever. 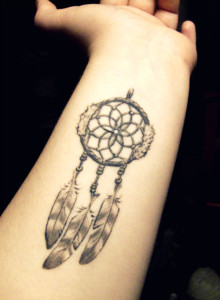 A dreamcatcher is part of the Native American culture. The feathers of the dreamcatcher stand for breath and air – the essentials of life. It is believed that each movement of the feather announces the arrival of a new dream. Dreamcatchers with one gem stone indicate there is one true creator of the web of live while the 4 gems represent the four original directions. These tattoos keep the negative and evil energies away; they also protect the people who wear them against nightmares and bad dreams. 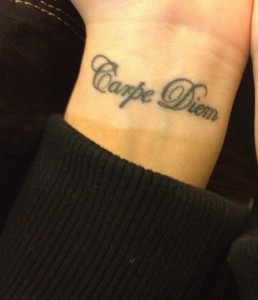 Get tattoos of quotes in exotic languages to stand out. The Latin phrase Capre Diem means ‘sieze the day’, Que sera sera –a Spanish phrase translates to ‘what is meant to be will be’. Such words and sayings are unique as well as help you stay in touch with your traditional roots. Such tattoos never really grow old and can always be used as a conversation starter!